If you haven’t seen this before, keep this in mind: just because a film is unrated doesn’t mean it’s age-appropriate. Example: This Film.

In an attempt to discover what exactly the MPAA really is, the documentary focuses on themes like how sex and violence is depicted and the inconsistent use of ratings. Peppered with interviews of acclaimed directors who had to fix their films one way or another, we get a glimpse into what could have been if it were not for the MPAA’s mandated “suggestions”. In the end, we see the board members revealed and that they do not necessarily follow the guidelines that they set up for themselves.

Now, the question is whether or not the current ratings, or even the MPAA, are out of touch with today’s culture. I say yes. First off, once you turn 18, you can attend a theatrical screening of any movie you want. Once the movie hits the home media market, all bets are off as to how old the customer is purchasing a film, regardless of whether or not the customer is mature enough to see it.

Second, the perception of what a movie is rated. “G” is usually seen on “kid films”, sometimes animated like Monsters University (which should have been a PG) or the rarer live-action film. The last G-rated live-action film I can think of that I’ve seen is Mister Magorium’s Wonder Emporium back in 2007. “PG” is enough where the kids think that they’re seeing some more serious stuff and the parents won’t have an issue with it, usually. Nowadays, an animated film will get a PG just because of the humor or maybe some action violence. “PG-13” is known as the most profitable rating because it has the widest (speculated) audience. “R” is typically an adult film. “NC-17”, well, that’s as hard-core as you can get, enough where just the mention of it means it won’t be successful unless it’s trimmed to an R and released on home media in different versions.

Third, why it’s rated. I find how ridiculous some of the descriptions are for movies. Like the Alice in Wonderland remake: “(typical reasons) and for a smoking catapillar.” Twister: “intense depiction of very bad weather.” Charlie and the Chocolate Factory: “quirky situations, (typical reasons).” Um, OK. I can create weird descriptors just like the professionals but the difference is that I’m not the one who gets laughed at when the reasons are made public.

It seems a pity that in an effort for clarification, the MPAA has made the descriptors more vague with the “Check the Box” campaign. I’ve discussed this in earlier posts when they released a revised green band. If you want specifics, you’d have to look at IMDB or a parents guide. It seems that the general public is better at telling why a movie is rated the way it is than some organization.

What exactly is needed? A complete redesign of the ratings system, and I’m not talking about the size of the box. I’ve found a suggested list here. Also, make the organization more transparent in terms of who’s in it.

Ultimately, it is up to the viewer or their guardian to decide whether or not to watch a movie based on what they know they can or cannot handle. What This Film does is present itself as an argument in the ratings debate that not everything is as it seems. Worth your time for anyone interested in the part that most people don’t think about when making a movie.

Since my last post in my “Following Preview” series, I have since made a few discoveries. The first being that since I’ve now been in a theater after the new green bands have been introduced, they still need some work. Back in the end of June, I went with a few friends to see Monsters University (review coming soon). The old and new green bands were seen in the trailers. I know that it won’t be until the end of the year at least when the old bands will be officially decommissioned in the sense that they will no longer grace the big screen. However, the trailers with the new bands did not have a rating attached. I suppose the time will eventually come.

Second, I have found an instance where my proposed suggestion about having the rating be shown clearly was used. Today, I saw The Princess Bride (2001 DVD print) and watched the accompanying TV spots. The rating, even without descriptors, filled approximately the same space that I had described. What I want to know is what exactly happened to cause the shrinking of the box to the point where the goal of clarity is a moot point.

As of now, I see at least two more installments of this series, hopefully done by the end of the year, possibly the beginning of next year. This will allow time for the new green bands to truly take over and any changes, if they so choose, made and corrected.

So, the MPAA has updated their ratings. They have already issued an example of the new “green band” screen. 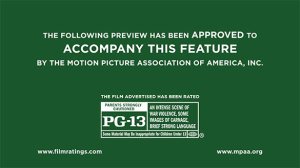 As you can see, the contents of the box have been shuffled around. I’m not a fan of this design. Obviously this is just an example, but this movie’s descriptors (the reasons why it’s rated the way it is) are too squished. I’m sure that when the new green bands are shown in a theater, they will be easier to read. For now, it’s hard to read.

I do like that the phrase “appropriate audiences” has been dropped. It did make sense but when the message was attached to the beginning of what would become a G-rated feature, I wondered what content could possibly be objectionable. I know that some people would find something that wouldn’t match their tastes. Fine, but I’m not those people.